The “right-brain versus left-brain” myth leads many to believe that creative people don’t have a place in the business world. This is not the reality at all. Creative people are an asset to business by being idea generators and innovative problem-solvers. If you are a creative person, the business world needs your skills. Walsh University’s online MBA program lets you earn your degree in one year or less and will add business acumen to your creative portfolio.

This article will explore ideas surrounding the “right-brain versus left-brain” personality theory, while discussing how creativity in business is important.

Consider this scenario. Bette Nesmith Graham was working as a secretary in the 1950s and started to experiment with using a small paintbrush and white tempera paint to correct typing errors. The tempera paint would flake off the paper and reveal the errors, so Ms. Graham continued to experiment with different formulas in her home kitchen. She eventually came up with Liquid Paper.

Ms. Graham’s invention evolved into a major company which she went on to sell for $47.5 million in 1979. Countless people had been using typewriters and paper since the 1800s. As a result of her innovative thinking, she invented something that was needed and still used by people to this day.

What is the “Right-Brain vs. Left-Brain” Myth?

If you felt some hesitation to think of a company secretary as being a creative person, it may be due to the idea of separation- that logic and creativity don’t belong together. The “right-brain vs. left-brain” myth has been used for decades. “Right-brained” dominant thinkers were deemed to be more creative, intuitive, and spontaneous, while “left-brained” thinkers were considered more logical, mathematical, and structured.

A Closer Look at Theory

The two sides of the brain have specializations, but these skills are not divided into neat sections. Neither side of the brain determines someone’s overall personality traits any more than being right-handed or left-handed determines it.

The right-brain left-brain myth had a prior scientific basis in Nobel Prize-winning research from Roger Wolcott Sperry in the 1960s. While trying to find a surgical way to treat epilepsy, Sperry discovered each side of the brain was specialized in certain tasks. His study went on to be misunderstood and linked to personality traits.

Current science shows there is no one dominant side of the brain controlling your personality. Dr. Robert H. Schmerling, Faculty Editor of Harvard Health Publishing explained in a 2017 blog post:

Ideas from the right-brain vs. left-brain mythology are still widely accepted. Many make assumptions about where creativity lives- that it’s more likely to be found among people on a graphic design team instead of those in an accounting firm. Believing these myths can be counterproductive- it leads people to pigeonhole themselves by thinking they cannot do certain things because they lack natural skills.

Consider these examples of progress. President Rutherford B. Hayes used a telephone for the first time in 1876 but could not imagine why anyone would want to use one. Then in 1977, Ken Olson, President of Digital Equipment, said there was no reason for an individual to have a computer in their home. Regardless, creative innovators like Alexander Graham Bell and Steven Jobs saw potential for the future. Today, we have phones, computers, smart devices, and more. Without creativity in business, life would be very different.

Another example of creativity in business is Martha Stewart. Starting in food catering, she grew her business into an industry on good living. Her work included a magazine, books, television shows, a website, products and marketing partnerships with other companies. Martha Stewart is a prime example of the successful executive who blended artistic vision with business sense, eventually becoming a cultural icon.

Earning an online MBA degree can help you achieve your business goals. Named a 2019 Best Value School by U.S. News and World Report, Walsh University has options for those who want to advance as innovative business professionals. With MBA concentrations available in Healthcare Management, Management, and Marketing, you can customize your degree. Learn more and contact us today.

Get Your Program Brochure 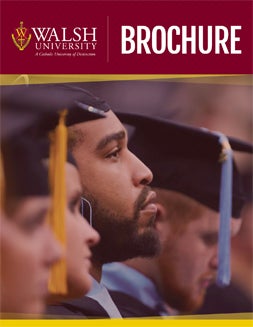